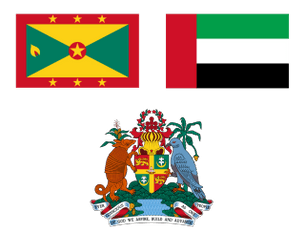 Elizabeth the Second, by the Grace of God, Queen of the United Kingdom of Great Britain and Northern Ireland and Grenada and Her other Realms and Territories. Elizabeth II (Elizabeth Alexandra Mary; born 21 April 1926) has been Queen of the United Kingdom, Canada, Australia, and New Zealand since 6 February 1952. She is Head of the Commonwealth and Queen of 12 countries that have become independent since her accession: Jamaica, Barbados, the Bahamas, Grenada, Papua New Guinea, Solomon Islands, Tuvalu, Saint Lucia, Saint Vincent and the Grenadines, Belize, Antigua and Barbuda, and Saint Kitts and Nevis.

Elizabeth was born in London as the eldest child of the Duke and Duchess of York, later King George VI and Queen Elizabeth, and she was educated privately at home. Her father acceded to the throne on the abdication of his brother Edward VIII in 1936, from which time she was the heir presumptive. She began to undertake public duties during the Second World War, serving in the Auxiliary Territorial Service. In 1947, she married Philip, Duke of Edinburgh, a former prince of Greece and Denmark, with whom she has four children: Charles, Prince of Wales; Anne, Princess Royal; Prince Andrew, Duke of York; and Prince Edward, Earl of Wessex.

Dr. The Right Hon. Keith Mitchell, Prime Minister of Grenada. Keith Claudius Mitchell (born 12 November 1946) is a Grenadian politician who has been Prime Minister of Grenada since 2013; previously he served as Prime Minister from 1995 to 2008. He is the longest-serving Prime Minister Grenada has ever had, holding the office for over 17 years. He is currently the leader of the New National Party (NNP) and was Leader of the Opposition in Parliament from 2008 to 2013. Mitchell graduated from the University of the West Indies with a Bachelor of Science degree in mathematics and chemistry in 1971. He gained a master's degree from Howard University in 1975 and a doctorate in mathematics and statistics from American University in 1979.